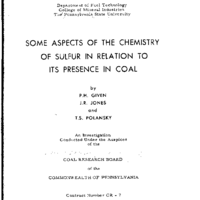 Special Research Report SR-41 A high volatile A bituminous coal has been carbonized at 600°C. in the presence of various additives, which, it was hoped, would trap the sulfur released by decomposition of pyrite and prevent its incorporation in the coke. Ten percent additions of ammonium chloride, sodium borohydride, p. terphenyl or pyromellitic dianhydride gave chars of materially decreased sulfur content; smaller additions had little effect. It was concluded that the results obtained would not justify the cost of large-scale use of the additives at the concentrations needed. Treatment of the coal at about 100°C. with aqueous solutions of various reagents known to attack pyrite did not give useful enough results. Little is known of the way in which organic sulfur is combined . in coals, how it behaves on carbonization, or how sulfur released by pyrite becomes fixed in the coke. Therefore, a chemical study has been made of various aromatic sulfur compounds selected as models of structures that may be present in coals and chars. These included some structures not previously suggested as present in coal and about which there is little information in the chemical literature. The properties studied included ultraviolet and infrared spectra, reactivity in various organic chemical reactions, and behavior on pyrolysis. It is concluded that the 4-thiopyrone nucleus when part of a condensed polynuclear system has much aromatic character and stability and could well be present in coals. It and related structures are, however, unlikely to survive carbonization, or to be formed in the course of carbonization at temperatures above 400-450°C. The sulfur released by pyrite probably goes mainly into carbon-sulfur surface complexes in the coke, but may be partly incorporated in the structure in highly condensed aromatic systems containing thiophene rings. Any sulfur incorporated in such rings will be difficult to remove, but further research may well reveal means of removing sulfur from carbon-sulfur surface :complexes,