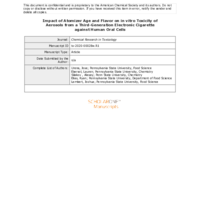 Electronic cigarettes (ECs) are categorized into generations which differ in terms of design, aerosol production, and customizability. Current and former smokers prefer third-generation devices that satisfy tobacco cravings more effectively than older generations. Recent studies indicate that EC aerosols from first- and second-generation devices contains reactive carbonyls and free radicals and can cause in vitro cytotoxicity. Third-generation ECs have not been adequately studied. Further, previous studies have focused on cells from the respiratory tract, whereas those of the oral cavity, which is exposed to high levels of EC aerosols, have been understudied. We quantified the production of reactive carbonyls and free radicals by a third-generation EC and investigated the induction of cytotoxicity and oxidative stress in normal and cancerous human oral cell lines using a panel of 8 commercial EC liquids. We found that EC aerosols produced using a new atomizer contained formaldehyde, acetaldehyde, and acrolein, but did not contain detectable levels of free radicals. We found that EC aerosols generated from only 1 of the 8 liquids tested using a new atomizer induced cytotoxicity against two human oral cells in vitro. Treatment of oral cells with the cytotoxic EC aerosol caused a concomitant increase in intracellular oxidative stress. As atomizer age increased with repeated use of the same atomizer, carbonyl production, radical emissions and cytotoxicity increased. Overall, our results suggest that third-generation ECs may cause adverse effects in the oral cavity and normal EC use, which involves repeated use of the same atomizer to generate aerosol, may enhance the potential toxic effects of third-generation ECs.