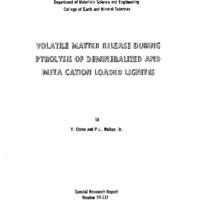 Special Research Report SR-117 Demineralized and cation loaded Texas lignites were pyrolyzed in a horizontal furnace under a stream of nitrogen at 5°C/min. up to 1000°C in order to investigate the effect of cations upon pyrolysis. Cation loaded lignites were prepared by exchanging protons on carboxyl groups with K, Na, Mg, Ca, and Ba after the demineralization of the raw coal. Rates of evolution of co 2 , CO, H2o, CH 4 , and H2 were determined by gas chromatography. Total weight loss was also studied under conditions simulating those used with gas chromatography. Cation loaded lignites exhibited a considerable increase in the yield of the five gases released. However, the presence of cations had little effect on the weight of char produced. The amount of co 2 evolved up to 1000°C corresponded to the carboxyl content for the demineralized lignite, but was considerably in excess of the carboxyl content for cation loaded lignites. Cation loaded lignites yielded more H2 and less CO and H20 than did the demineralized lignite. It is thought that metal catalyzed secondary reactions, especially the water-gas shift and carbon-steam reactions, play a major role in determining the quantity and composition of gas evolved