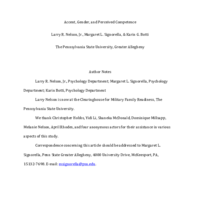 Those who use non-indigenous accented speech often experience prejudice and discrimination, and in the United States, those speaking with Spanish accents are likely to be impacted. In research on the influence of accents on perceptions of the speaker, however, the relation of gender of the speaker or of the perceiver has received less attention. Therefore, in the present study, the impact of accent (North American- versus Spanish-accented English), gender of speaker, and gender of rater on perceptions of competence were investigated in a sample of undergraduate students in the United States. Participants listened to a recording of a newspaper article excerpt read by either a male or female speaker who spoke in English with either a North American or Spanish accent. The results from ratings of communication competence and speaker knowledge supported the hypotheses that Spanish-accented speakers would be more likely to be judged negatively, that female speakers would be more likely to receive negative assessments, and that male participants would be more likely than female participants to show bias related to accent. The neglect of gender in the study of accent bias is discussed.