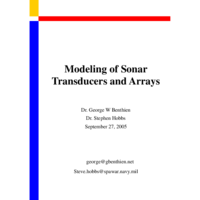 Modeling of Sonar Transducers and Arrays

This material was originally created as a CD-ROM and made available by the authors through DTIC and through the personal web site of one of the authors. However, it has sometimes been difficult to obtain through DTIC. It is stored here as a way to make it more easily available to the Penn State community.

Title: Modeling of Sonar Transducers and Arrays Authors: George W. Benthien and Stephen Hobbs Date: September 27, 2005 From the authors' introduction: This report contains a number of topics that the authors have found to be important in the modeling of sonar transducers and transducer arrays. The work was sponsored by ONR code 321SS under the direction of Jan Lindberg. Much of the material in this report is taken from the Handbook of Acoustic Projector Technology [G. Benthien and D. Barach, Handbook of Acoustic Projector Technology. SPAWAR Technical Document 2980, Rev. 1 (1998)]. This handbook had limited distribution since some of the material was classified as military critical, The primary purpose of this report is to present the non military critical parts of the handbook in a form that is available to a larger audience.