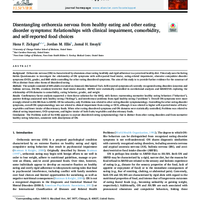 Background: Orthorexia nervosa (ON) is characterized by obsessions about eating healthily and rigid adherence to a perceived healthy diet. This study uses the Eating Habits Questionnaire to investigate the relationship of ON symptoms with self-reported food intake, eating-related impairment, obsessive compulsive disorder symptoms (OCD), gender, and BMI while controlling for other eating disordered symptoms. The aim of this study is to provide further evidence for the construct of ON as distinct from other forms of disordered eating. Methods: The sample consisted of 449 adults recruited on Amazon's Mechanical Turk. Self-reported symptoms of currently recognized eating disorders (anorexia and bulimia nervosa, AN/BN, avoidant/restrictive food intake disorder, ARFID) were statistically controlled in correlational analyses and MANCOVA exploring the relationship of ON domains to comorbidity, eating behavior, gender, and weight. Results: Confirmatory factor analysis supported a three-factor solution for the EHQ, with factors representing normative healthy eating behaviors (“behaviors”), positive feelings associated with healthy eating (“feelings”), and interference/problems from rigid healthy eating (“problems”). Overall ON symptoms were more strongly related to AN/BN than to ARFID. Of the subscales, only Problems was related to other eating disorder symptomatology. Controlling for other eating disorder symptoms, overall ON symptomatology was not related to clinical impairment from eating or OCD, although it was related to higher self-reported intake of fruits/vegetables and lower intake of discretionary foods. When other eating disordered symptoms and ON domains were statistically controlled, Problems was related to clinical eating impairment, OCD symptoms, and higher intake of both fruits/vegetables and discretionary foods. Conclusions: The Problems scale of the EHQ appears to capture disordered eating symptomatology that is distinct from other eating disorders and from normative healthy eating behaviors, consistent with descriptions of ON.