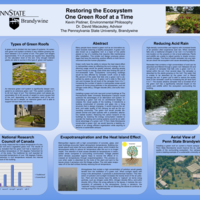 Restoring the Ecosystem One Green Roof at a Time

A green roof, also known as a vegetative roof, is a layer of live plants placed on top of a building that requires little maintenance after installation. Green roofs have the ability to reduce the heat island effect in metropolitan areas by reflecting the sun’s energy. Air conditioning usage would be greatly reduced, allowing people to save money on energy costs while also limiting the use of non-renewable fuels. Ecosystems surrounding buildings would be less affected by rainwater runoff, since at least fifty percent of the water that falls onto a green roof is absorbed by plants and soil. Increasing the number of plants in metropolitan areas would capture air borne smog particles in the atmosphere, such as nitrogen oxide (NO2), nitrogen dioxide (NO), and sulfur dioxide (SO2). Installing a green roof onto new and current buildings at The Pennsylvania State University Brandywine Campus would improve the air, land, and water quality of the campus as well as the surrounding community.