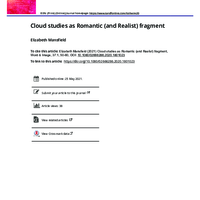 Abstract Henri Zerner and Charles Rosen’s meditation on the significance of the Romantic “fragment” is followed a few pages later by a passing reference to Alexander Cozens’s A New Method of Assisting the Invention in Drawing Original Compositions of Landscape (1785–86). They do not elaborate on the treatise’s relevance for their argument, except to observe that Cozens’s “blots” show an early engagement with abstraction. With this off-hand citation, Zerner and Rosen present their readers with a fragment of their own. To take up and examine this rhetorical fragment is to see that Cozens plays a crucial role in Zerner and Rosen’s formulation that Romanticism and Realism are mutually constitutive, that they are expressions of the same aesthetic and social impulses. In no place is this made clearer than through Cozens’s deployment of cloud studies. A consummate expression of Friedrich Schlegel’s conception of the fragment as “a little work of art, complete and perfect in itself, and separate from the rest of the universe,” cloud studies nonetheless remain marginal to inquiries into the history of Romanticism. Most scholarship on cloud studies seeks to identify their presumptive referent, whether contemporary interest in meteorology or trends in Christian theology. Rather than proceeding from the assumption that cloud studies represent something, this article argues that this exemplary fragment illustrates Romantic (and, hence, Realist) aesthetic theory itself. What is more, this article argues that cloud studies, as theorized by Cozens, provide visual support for a new history of nineteenth-century French Realism that resolves its vexed relationship with British art.