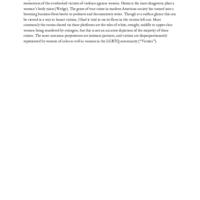 Casteel, Kathryn. et al. “What We Know About Victims Of Sexual Assault In America.” FiveThirtyEight, 2 Jan. 2018, projects.fivethirtyeight.com/sexual-assault-victims/. Widra, Emily. “Stark Racial Disparities in Murder Victimization Persist, Even as Overall Murder Rate Declines.” Prison Policy Initiative, www.prisonpolicy.org/blog/2018/05/03/homicide_overtime/. True Crime is an industry that is booming in modern culture, from Netflix series to podcasts. As a victim of abuse, I have over the last few years discovered the stories of others through the true crime genre, but through my consumption, flaws regarding the subject became unignorable. Time and time again, major producers of true crime focus on the stories of white victims of crime, often those that are disproportionate to victims of crime such as murder and abuse in America. Through writing these poems, I desired to tell the stories of those whose stories were overshadowed by affluent, CIS, white victims. I wanted to represent various truths such as: more black people are murdered than white people despite making up only 12% of the US population (Widra); women are killed by intimate partners at twice the rate of men; those whose household earns less than $25k make up 22% of the US population yet they make up 44% of victims of sexual violence (Casteel). My goal through my presentation is to tell the stories of victims falling into majority categories rather than those falling into the typical story of straight, white, random victims of violence.