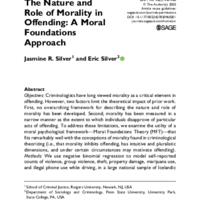 The Nature and Role of Morality in Offending

Objectives: Criminologists have long viewed morality as a critical element in offending. However, two factors limit the theoretical impact of prior work. First, no overarching framework for describing the nature and role of morality has been developed. Second, morality has been measured in a narrow manner as the extent to which individuals disapprove of particular acts of offending. To address these limitations, we examine the utility of a moral psychological framework—Moral Foundations Theory (MFT)—that fits remarkably well with the conceptions of morality found in criminological theorizing (i.e., that morality inhibits offending, has intuitive and pluralistic dimensions, and under certain circumstances may motivate offending). Methods: We use negative binomial regression to model self-reported counts of violence, group violence, theft, property damage, marijuana use, and illegal phone use while driving, in a large national sample of Icelandic youths (n = 10,710). Results: We find that individualizing moral intuitions centered on rights and autonomy and binding moral intuitions centered on social order and cohesion are uniquely associated with different types of offending and exhibit inhibiting or motivating effects depending on the outcome. Conclusion: MFT holds considerable promise as a framework for conducting criminological research on the relationship between morality and offending.