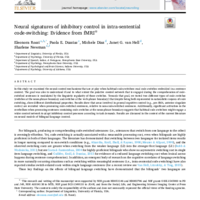 In this study we examined the neural control mechanisms that are at play when habitual code-switchers read code-switches embedded in a sentence context. The goal was also to understand if and to what extent the putative control network that is engaged during the comprehension of codeswitched sentences is modulated by the linguistic regularity of those switches. Towards that goal, we tested two different types of code switches (switches at the noun-phrase boundary and switches at the verb-phrase boundary) that despite being both represented in naturalistic corpora of code switching, show different distributional properties. Results show that areas involved in general cognitive control (e.g., pre-SMA, anterior cingulate cortex) are recruited when processing code-switched sentences, relative to non-code-switched sentences. Additionally, significant activation in the cerebellum when processing sentences containing code-switches at the noun-phrase boundary suggests that habitual code-switchers might engage a wider control network to adapt inhibitory control processes according to task demands. Results are discussed in the context of the current literature on neural models of bilingual language control.