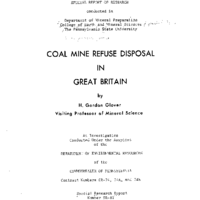 Special Research Report SR-81 Great Britain's mining districts, like any other coal producing area, e.g., Pennsylvania, have a heritage of derelict land, the result of former mining prosperity. Coal has been mined in Great Britain since the Roman occupation, about 2,000 years ago, Production by the end of the 19th century had reached 200 million tons per year, The 1969 production of coal in Britain totaled 150 million long tons, Coal mine refuse has increased during the last forty years, Over 90% of the mine refuse is now discharged to banks. Refuse output was expected to peak at 60 to 80 million tons per year in 1966~68 and then ·gradually decline, The number and size of unsightly refuse banks have increased in the past few decades. In 1964, there were about 150, 000. acres of derelict land in BritaJ..n, Half of this was caused by refuse banks, the other half by unfilled excavations, The quantity of coal mine refuse in these banks was approximately one to two billion tons mainly from bituminous operations, Some of these refuse banks are burning, which complicates the problem. In 1953, over 200 of some 400 banks examined in England, were em1 tt1ng slight fumes, and some 20 were emitting severe fumes. The anthracite refuse banks, in general, did not burn, The time to act was at hand and con-trols were enacted to correct these conditions,