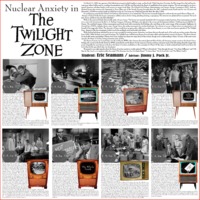 Nuclear Anxiety in The Twilight Zone

On March 17, 1953, two agencies of the federal government worked together to stage nuclear bomb. Titled Operation Doorstep, the lm images from the test have be- come pop culture fodder used in countless documentaries and Cold War-era lms about the threat of annihilation from atomic weapons. The test was staged to see how a typical American suburban family would survive an atomic bomb blast. The Federal Civil Defense Administration and Atomic Energy Commission (AEC) built two identical houses (two stories and a basement) in Yucca Flats, part of the Nevada Proving Grounds where the AEC conducted atomic bomb tests for over 30 years and detonated a 15,000 ton nuclear bomb at 3,500 feet in the air. One house was 3,500 feet from the blast, the other 7,500. In a preliminary report by the Federal Civil Defense Administration, it was stated that “The test was necessarily designed to indicate the structural effects of blast only... . Because of lack of funds, the houses contained no utilities such as electric wiring, plumbing, heating, or gas piping. The interiors were plastered but not painted. The wood trim, doors, and oors were also left un nished.” Without the structural details that actually make a house a home, “The houses were sparsely furnished with Government surplus furniture. Store mannequins, provided at no cost to the Government by the L. A. Darling Company of Bronson, Michigan, were placed in the rooms and the basement shelters.” Clothing was provided by J.C. Penney. The mutilated images of these mannequins post-bomb stuck with screenwriter Rod Serling, who used them as the center image of his screenplay Nightmare At Ground Zero (1953), a teleplay about a man, George Vance, who makes mannequins for nuclear bomb tests. He is driven to use one of these tests as an opportunity to rid himself of his naggy wife, Helen. The character of Vance would show up again under a different moniker, Henry Beamis, in one of the most famous episodes of The Twilight Zone. Beamis is, like his counterpart, lorded over by his needlessly cruel and hostile wife Helen. While Serling had always admitted he was not very successful at creating women characters, one theme that ran through much of his work was nuclear anxiety. Running from 1959-1964, Serling’s crown jewel of writing, The Twilight Zone, tackled many themes of social justice while exploring what it meant to be human. The show is known for its double twists, superseding O’Henry-level irony. Serling was always two steps ahead of his viewers, though never condescending to them. Of some of the most iconic episodes, the theme of nuclear anxiety permeates many of them. The threat of atomic war loomed large over the world post-WWII, after German theoretical physicist Klaus Fuchs sold American atomic secrets to the Soviet Union. Serling, who served in the Paci c theater in WWII, immediately saw the threat of such weapons to human existence and spent much of his life writing about the danger they posed. (Arguably his most famous work about the threat of nuclear annihilation is the screenplay for Planet Of the Apes, in which mankind nds itself forced down the food-chain by the apes which take over the planet.)