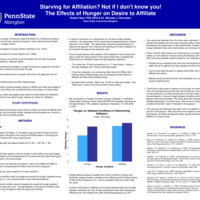 Starving for Affiliation? Not if I don't know you! The Effects of Hunger on Desire to Affiliate

Hunger is a unique motivational state that affects our actions either consciously or subconsciously. In this study it was hypothesized that hunger would effect a person's desire to affiliate with either new friendships or already existing relationships. 59 participants (18 Males, 48 Females) around the age of 20.47 (M = 1.69, SD = .46) were recruited for this study. In this experiment, the participants were asked to fast for 4 hours before arriving at the lab. When they arrived they were put into two rooms, each room having a different condition; pre-satiated and post-satiated. Those in the pre-condition were given popcorn during the study and those in the post-condition were given popcorn after. They were then asked to fill out multiple questionnaires, the first one being the State Desire for Affiliation scale. The results were obtained using a 2 Hunger Condition (Hungry, Satiated) x 2 Affiliation Target (New, Existing) mixed model ANOVA with repeated measures on the second factor. This yielded significant results, F(1,55)=9.89. p=.003. The results state that people who are hungry are less likely to want to affiliate with new people, while people who are not hungry are more likely to be open to affiliation with either new or existing friendships. This agrees with our initial hypothesis that states that hunger does in fact affect how we affiliate with others.