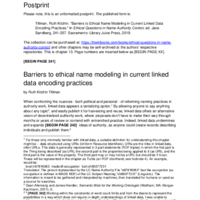 Although RDF modeling in name authority control allows for multiple names and name forms to be associated with the same person or entity, modeling practices among the main sources of authority work have not yet evolved to a point where such forms can be used without human intervention. This chapter explores how names are currently modeled by national bibliographic sources, such as the Library of Congress’s linked data service, and international bibliographic aggregators, such as VIAF. It addresses questions such as “whose preference is reflected in a ‘preferred label’?” and how a more nuanced modeling might be represented. It outlines barriers which exist, ranging from systems which don’t functionally act on URIs to lack of consensus on modeling and an inability to determine which alternative label represents how a person actually wishes to be represented. Postprint of: Tillman, Ruth Kitchin. "Barriers to Ethical Name Modeling in Current Linked Data Encoding Practices." In Ethical Questions in Name Authority Control, ed. Jane Sandberg, 241-257. Sacramento: Library Juice Press, 2019.