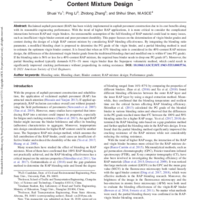 Reclaimed asphalt pavement (RAP) has been widely implemented in asphalt pavement construction due to its cost benefits along with its reasonable engineering performance. With the trend of higher RAP applications, it is more critical to consider the complicated interactions between RAP and virgin binders. An unreasonable assumption of the full blending of RAP material could lead to many issues, such as insufficient virgin binder content and poor pavement durability. This paper focuses on the determination of virgin binder grades and content during the design of a high RAP content mixture by considering RAP blending effectiveness. By integrating the blending ratio parameter, a modified blending chart is proposed to determine the PG grade of the virgin binder, and a partial blending method is used to estimate the optimum virgin binder content. It is found that when an 83% blending ratio is considered in the 40%-content RAP mixture design, the differences of the determined virgin binder grade from the traditional blending chart and modified one is within 6° (one PG grade). If the blending ratio is 56% or less for a 40%-content RAP mixture, the required base binder needs to drop one PG grade (6°). Moreover, the partial blending method typically demands 0.5%-1% more virgin binder than the Superpave volumetric method, which could result in significantly improved cracking performance without jeopardizing its rutting resistance.