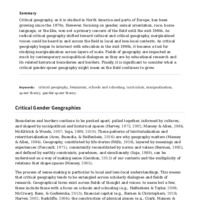 Critical geography, as it is studied in North America and parts of Europe, has been growing since the 1970s. However, focusing on gender, sexual orientation, race, home language, or the like, was not a primary concern of the field until the mid-1980s. As radical critical geography shifted toward cultural and critical geography, marginalized voices could be heard in and across the field in local and less-local contexts. As critical geography began to intersect with education in the mid-1990s, it became a tool for studying marginalization across layers of scale. Fields of geography are impacted as much by contemporary sociopolitical dialogues as they are by educational research and its related historical boundaries and borders. Finally, it is significant to consider what a critical gender-queer geography might mean as the field continues to grow.