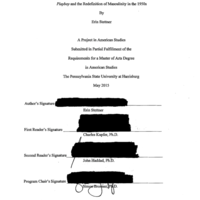 They Really DID Read It for the Articles: Playboy and the Redefinition of Masculinity in the 1950s

Following the crisis of masculinity in the mid-late 1940s, Playboy magazine emerged as not only a source of entertainment, but a means by which men could redefine themselves and their roles in society. Traditionally, men were defined by their ability to provide for their families; however, women were given that opportunity during WWII, and were reluctant to relinquish their newfound social and economic control once the war ended. Due to sweeping economic growth and dramatic changes in the family dynamic following the war, men struggled to reconcile their visions of their own identities with the changing societal vision. They began to participate in activities which promoted a new vision of manhood, while at the same time attempting to remove any power which women had gained during the war. Playboy Magazine proved to be an important tool, perhaps the most important tool, in providing men with alternative definitions of manliness, offering them the opportunity to indulge in a new lifestyle filled with sexual freedom and luxury. The struggle between the sexes was political, social and personal. The change in perceptions of sex and sexuality pushed men and women out of their comfort zones and forced them to reevaluate long held traditions. Playboy afforded men the opportunities to do this, while simultaneously offering alternative definitions of what it meant to be “a man.”
While Playboy undoubtedly promoted masculinity through sexuality, Hefner presented high culture as an unconventional means by which men could define themselves. Men in the early 50s were not marrying as young as they previously had, meaning that more men were living alone in apartments, rather than with a family in single homes. Because of this, an appreciation for architecture and home décor, previously considered part of the feminine sphere, was now a hallmark of a playboy, under the auspices of “good taste.” A modern fashion sense was also important, as a playboy was urged to achieve a specific look which marked him as both successful and sophisticated. An education in literature, music and art was necessary for carrying on pleasant conversation, either with a date or with a dinner party. Playboy contained selections of classic literature and modern literature, as well as articles on popular art, and interviews with famous musicians. Hefner made it cool to be cultured, and men appreciated the ability to construct non-traditional identities.