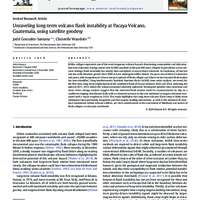 Edifice collapse represents one of the most dangerous volcanic hazards threatening communities and infrastructure near volcanoes, having caused over 20,000 casualties in the past 400 years. Despite its prevalence across volcanic settings, flank instability has mostly been considered at ocean island volcanoes. In Guatemala, all but one volcano with elevation greater than 2000 m have undergone edifice failure. Pacaya is one of these Guatemalan volcanoes, which experienced at least one past episode of flank collapse and where recent transient flank motion has been identified. Using Interferometric Synthetic Aperture Radar (InSAR) time-series analysis, we reveal, for the first time, long-term displacement of the southwest flank of Pacaya between 2010 and 2014, including the interval 2011–2013 where the volcano remained relatively quiescent. Subsequent geodetic data inversions and static stress change analysis suggest that the observed flank motion could be accommodated by slip on a southwest-dipping detachment fault, with an observed increase in slip rate attributed to magma intrusion associated with a major eruption in 2014. This study highlights that long-term volcanic flank creep is likely more widespread than previously recognized and that magma-faulting interactions, as well as the existence of structural weaknesses within volcanic edifices, are vital considerations in the assessment of likelihood and nature of flank collapse at volcanoes worldwide.