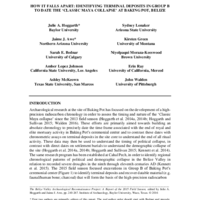 This archaeological study has focused on understanding the relationship between severe drought and the collapse of Classic Maya political institutions and demographic decline at the end of the Classic period (AD 750-1000) in the central Maya lowlands. A series of severe droughts have been recorded at the end of the Classic period, which generally overlap with the time period associated with the ‘Classic Maya collapse’. Ceramic evidence in the Belize River Valley, located in western Belize, has suggested differences in the timing of depopulation between the Classic Maya centers of Baking Pot and Cahal Pech. However, radiocarbon dates on human burials from the site of Baking Pot contrasted with these data and suggested that the disintegration of political systems and the depopulation of that site occurred at the end of the Classic period similar to the timing of other Belize Valley centers rather than persisting continuously into the Postclassic period. This project was established to better understand the nature and timing of political and demographic collapse across the central Maya lowlands, as well as to establish high-precision radiocarbon chronologies that can be directly comparable to a sub-annually resolved paleoclimate record. Ultimately, this interdisciplinary scientific work examined the question of whether multi-decadal droughts contributed to agricultural failure, the breakdown of political systems, and the abandonment of Classic Maya urban centers. These issues are important in order to establish well-dated archaeological examples that can serve as case studies to better understand the long-term impacts of climate change on populations. Archaeological studies are critical for understanding these issues, as they offer important time depth to understand how societies respond and adapt to changing climatic conditions in modern times.

This study was focused on answering several important questions and issues in relation to societal collapse and climate change. First, the project directly dated human burials as well as animal remains from ‘terminal deposits’ (which represent the final activities in the ceremonial centers in the region) to identify the timing of declines and the cessation of political activity in the region. This information helped to answer the question of whether political collapse and abandonment at the end of the Classic period correlated with extended drought episodes.

Together, these data offer important information about the responses and adaptations of the Classic Maya to climatic stress. Mortuary activity in both ceremonial (political) and domestic contexts at both Baking Pot and Cahal Pech declined during periods of climatic instability and multi-decadal drought. Although evidence for demographic decline during periods of drought could be identified at both Cahal Pech and Baking Pot, low-level population may have continued almost a century later at the latter site. However, these populations were not constructing monumental architecture or elaborate mortuary architecture, but burials were placed in pits within existing structures. This difference may be attributable to the location of Baking Pot on the fertile alluvial soils along the Belize River, where populations could have relied on riverine resources.

How it falls apart: Identifying terminal deposits in Group B to date the 'Classic Maya collapse' at Baking Pot, Belize