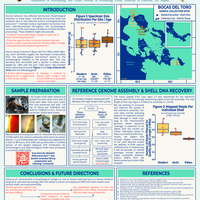 Modern, archaeological, and paleontological DNA analysis of a marine gastropod from Caribbean Panama

Abstract: Genomics is an increasingly accessible tool for characterizing morphological evolution, and ancient DNA provides a direct window into the chronology of allele frequency changes associated with trait evolution. Molluscan shells are a reservoir for DNA; their abundance in museum collections provides an opportunity to explore mollusc evolutionary change over time, including direct and indirect responses to human behavior. We are studying the evolutionary genomic signatures of human size-selective harvesting pressures on the intertidal marine fighting conch (Strombus pugilis) in Caribbean Panama, for which a 40% decrease in body mass at maturity over the past ~1,500 years due to subsistence harvesting by local human foragers has been documented. Although protocols exist for the recovery of ancient DNA from land snail and marine bivalve shells, marine conch shells have yet to be studied from a paleogenomic perspective. Here we present a reference genome sequence assembled from fresh tissue of S. pugilis, along with a comparison of multiple methods used to extract and sequence ancient DNA from archaeological midden (984-1258 BP, n = 24) and paleontological reef (5711-7187 BP, n = 11) conch shells, with a control comparison to DNA extracted from both tissue and shell samples from the modern individuals of the same species from the same region (n = 30). With successful recovery of ancient DNA from the conch shells, it will ultimately be possible to directly track the evolutionary history of size-associated genetic variants during the shift to increased subsistence harvesting relative to variants from other regions of the genome, and to develop new evolutionary hypotheses based on novel signatures of past positive selection. These general methods can be applied to middens worldwide to facilitate reconstructions of long-term records of the impacts of human behavior on mollusc evolutionary biology. Authors: Alexis P. Sullivan, Aaron O'Dea, Thomas Wake, George H. Perry Acknowledgements: We thank Stephanie Marciniak, Christina Bergey, and Kathleen Grogan for their discussion and analytical advice. We also thank Daniel Schussheim for crafting the shell smasher, as well as Ashley Sharpe, Nicole Smith-Guzman, Suzette Flantua, Jarrod Scott, Matthieu Leray, and Wilmer Elvir for their assistance in sample collection. This material is based on work supported by the National Science Foundation Graduate Research Fellowship Program (DGE-1255832, to A.P.S.), the Smithsonian Tropical Research Institute Short-Term Fellowship Program (to A.P.S.), and the SNI program from the Secretaría Nacional de Ciencia y Tecnología e Innovación, Panamá.