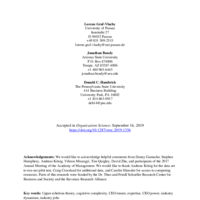 Effects of an Advancing Tenure on CEO Cognitive Complexity

<jats:p> We study how the cognitive complexity of chief executive officers (CEOs) changes during their tenures. Drawing from prior theory and research, we argue that CEOs attain gradually greater role-specific knowledge, or expertise, as their tenures advance, which yields more complex thinking. Beyond examining the main effect of CEO tenure on cognitive complexity, we consider three moderators of this relationship, each of which is expected to influence the accumulation of expertise over a CEO’s time in office: industry dynamism, industry jolts, and CEO positional power. We conduct our tests on a sample of 684 CEOs of public corporations. The analytic centerpiece of our study is a novel index of CEO cognitive complexity based on CEOs’ language patterns in the question-and-answer portions of quarterly conference calls. As part of our extensive theory of measurement, we provide evidence of the reliability and validity of our index. Our results indicate that CEOs, in general, experience substantial increases in cognitive complexity over their time in office. Examined moderators somewhat, but modestly, alter this general trajectory, and nonlinearities are not observed. We discuss the implications of our findings. /jats:p