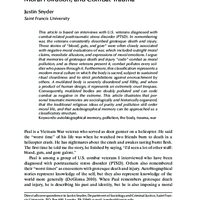 This article is based on interviews with U.S. veterans diagnosed with combat-related posttraumatic stress disorder (PTSD). In remembering war, the veterans consistently described grotesque death and injury. These stories of “blood, guts, and gore” were often closely associated with negative moral evaluations of war, which included outright moral claims, moralistic allusions, and expressions of moral emotions. I argue that memories of grotesque death and injury “code” combat as moral pollution, and as these veterans present it, combat pollutes every soldier who passes through it. Furthermore, this classification represents a modern moral culture in which the body is sacred, subject to sustained ritual cleanliness and to strict prohibitions against encroachment by others. A mutilated body is severely disordered and filthy, and when a product of human design, it represents an extremely cruel trespass. Consequently, mutilated bodies are doubly polluted and can code combat as negative in the extreme. This article illustrates that personal traumatic memories are sociologically and historically organized, that the traditional religious ideas of purity and pollution still order moral life, and that autobiographical memory can be approached as a classificatory structure.