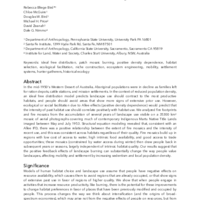 <jats:p>In the mid-1950s Western Desert of Australia, Aboriginal populations were in decline as families left for ration depots, cattle stations, and mission settlements. In the context of reduced population density, an ideal free-distribution model predicts landscape use should contract to the most productive habitats, and people should avoid areas that show more signs of extensive prior use. However, ecological or social facilitation due to Allee effects (positive density dependence) would predict that the intensity of past habitat use should correlate positively with habitat use. We analyzed fire footprints and fire mosaics from the accumulation of several years of landscape use visible on a 35,300-km<jats:sup>2/jats:supmosaic of aerial photographs covering much of contemporary Indigenous Martu Native Title Lands imaged between May and August 1953. Structural equation modeling revealed that, consistent with an Allee ideal free distribution, there was a positive relationship between the extent of fire mosaics and the intensity of recent use, and this was consistent across habitats regardless of their quality. Fire mosaics build up in regions with low cost of access to water, high intrinsic food availability, and good access to trade opportunities; these mosaics (constrained by water access during the winter) then draw people back in subsequent years or seasons, largely independent of intrinsic habitat quality. Our results suggest that the positive feedback effects of landscape burning can substantially change the way people value landscapes, affecting mobility and settlement by increasing sedentism and local population density./jats:p