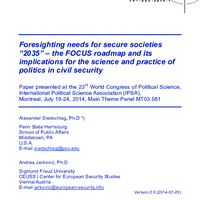 There is more than the societal dimension of security: the societal creation of security. There are no effective technological solutions without acceptance and public participation. Security Research should consider significant social, cultural, ethical, legal, and political aspects of security from the very beginning, that is, not only in the implementation perspective and in terms of public acceptance and ascribed legitimacy. Thus, civil security is becoming an own sub-field of public policy analysis, addressing societal security from a governance perspective. While “security governance” as such is not a new concept, it mainly has been applied to international security and strategic studies. However, growing concern about “societal security,” public acceptance of home affairs, internal security, or homeland security and related technologies, the “objective” (factual) vs. “subjective” (felt) security continuum, and the internal–external security continuum show the relevance of a governance approach to civil security. This need is contributed to by the increase in phenomena of “securitization,” whereby issues are speech-acted as security concerns and thus removed from the normal policy and governmental process. The FOCUS project on “foresight security scenarios” and a comprehensive approach to civil security in the 2035 time-frame had a two-year mission, co-funded by the European Union. FOCUS performed multiple foresights on the international scale, including collaboration with foresight initiatives and project in a couple of countries, including far beyond the EU. The project aimed to define the most plausible scenarios of security challenges affecting the EU on the “borderline” between the external and internal dimensions to security – and to derive guidance for research in support of EU roles to address those challenges. Scenario foresight in the FOCUS project was done on the level of critical and creative – yet methodologically guided – forward thinking at strategic level in order to increase the ability to cope with relevant alternative futures from the near future until 2035. The first part of the paper introduces the FOCUS scenario foresight approach. The second part presents selected results from FOCUS scenario foresight on future EU roles as a comprehensive security provider to its citizens, as they were used in roadmap development. The third part describes the reference scenarios towards which the roadmap was geared. The fourth part introduces the FOCUS roadmap for “Security Research 2035” to support civil security roles of the EU of the future. A brief fifth part provides an outlook on the way ahead: governing civil security and the research that contributes to it.