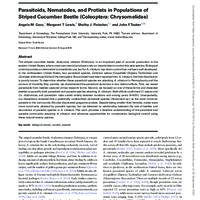 The striped cucumber beetle, Acalymma vittatum (Fabricius), is an important pest of cucurbit production in the eastern United States, where most commercial producers rely on insecticides to control this pest species. Biological control provides an alternative to insecticide use, but for A. vittatum, top-down control has not been well developed. In the northeastern United States, two parasitoid species, Celatoria setosa (Coquillett) (Diptera: Tachinidae) and Centistes diabroticae (Gahan) (Hymenoptera: Braconidae) have been reported from A. vittatum, but their distribution is poorly known. To determine whether these parasitoid species are attacking A. vittatum in Pennsylvania and the amount of mortality they provide, we characterized the parasitoid dynamics in two distinct efforts. First, we reared parasitoids from beetles captured at two research farms. Second, we focused on one of these farms and dissected beetles to quantify both parasitoid and parasite species attacking A. vittatum. Both efforts confirmed Cl. setosa and Cn. diabroticae, and parasitism rates varied widely between locations and among years (4-60%). Unexpectedly, our dissections revealed that a potentially undescribed nematode species (Howardula sp.) as the most common parasite in the community. We also discovered gregarine protists. Despite being smaller than females, males were more commonly attacked by parasitic species, but we detected no relationship between the size of beetles and abundance of parasitic species in A. vittatum. This work provides a baseline understanding of the parasitoid and parasite community attacking A. vittatum and advances opportunities for conservation biological control using these natural-enemy species.