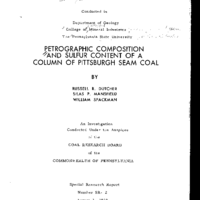 A column of the Pittsburgh seam measuring 64 inches thick was collected from the Mathies Mine of the Mathies Coal Company in Washington County, Pennsylvania. From this column 16 polished blocks and 142 thin sections were prepared such that the entire seam was covered by both methods. Sixty-four sulfur analyses were also made, each representing an "inch level" of the seam. It was found from examination of the sulfur analyses that the percentage of total sulfur in the seam is not constant throughout, but varies from 0.26% to 5.44%. The organic sulfur, on the other hand, shows a lesser variation from 0.75% near the top to 1.5% near the bottom of the seam. The sulfate and sulfide sulfur shows a concentration near the top and bottom of the seam, another peak approximately 35 inches from the top of the seam, in a li thotype associated with the "bearing-in-bands", and a fourth peak located at the 41 to 42 inch level. From a study of the master column and thin sections the seam was divided into 16 lithotype zones. Of particular significance is the fact that each sulfur peak fell within the boundaries of an individual lithotype. It is also interesting to note that the lithotypes which contain the high sulfur peaks were not all of the same type. Certain ones are high in vitrinoids while others are high in their fusinoid content. The principal modes of occurrence of the sulfur are as cleat fillings, both gypsum and pyrite, and as cell fillings in the fusinoids and microcrystalline aggregates of pyrite in the vitrinoids.