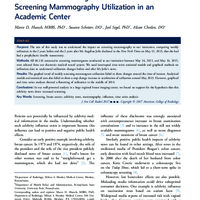 Purpose The aim of this study was to understand the impact on screening mammography at our institution, comparing weekly utilization in the 2 years before and the 2 years after Ms Angelina Jolie disclosed in the New York Times on May 13, 2013, that she had had a prophylactic double mastectomy. Methods All 48,110 consecutive screening mammograms conducted at our institution between May 16, 2011, and May 16, 2015, were selected from our electronic medical record system. We used interrupted time series statistical models and graphical methods on utilization data to understand utilization changes before and after Ms Jolie's news. Results The graphed trend of weekly screening mammogram utilization failed to show changes around the time of interest. Analytical models and statistical tests also failed to show a step change increase or acceleration of utilization around May 2013. However, graphical and time series analyses showed a flattening of utilization in the middle of 2014. Conclusions In our well-powered analysis in a large regional breast imaging center, we found no support for the hypothesis that this celebrity news drove increased screening.