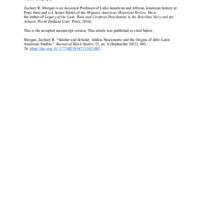 Abdias Nascimento shaped Brazil and the lives of Afro-Brazilians as an activist, as a politician, as an internationally recognized scholar, and through the arts as a playwright, a director, a poet, and painter. Through a scholarly career that spanned much of the 20th century and continued into the 21st, his ideas preceded and served as a model for the recent growth of Afro-Latin American studies as a discipline. This article draws on Nascimento’s writing to shed light on the less studied period when he was enrolled in the Brazilian army in São Paulo from 1930 to 1936, as well as the two related periods during which he was incarcerated between 1936 and 1938. This essay argues that—much like Afro-descendant soldiers globally who fought in conflicts from the American Wars of Independence through the World Wars of the 20th century—military service and his subsequent captivity deeply inpacted Abdias Nascimento. His relations with the Brazilian military and its penal institutions guided his concept of race, citizenship, and nation, his activism and scholarship, and subsequently helped mold the contemporary field of Afro-Latin American studies, directly and indirectly.