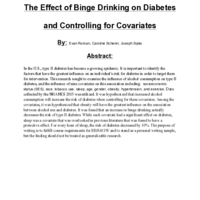 The Effect of Binge Drinking on Diabetes

In the U.S., type II diabetes has become a growing epidemic. It is important to identify the factors that have the greatest influence on an individual's risk for diabetes in order to target them for intervention. This research sought to examine the influence of alcohol consumption on type II diabetes, and the influence of nine covariates on this association including: socioeconomic status (SES), race, tobacco use, sleep, age, gender, obesity, hypertension, and exercise. Data collected by the NHANES 2015 was utilized. It was hypothesized that increased alcohol consumption will increase the risk of diabetes when controlling for these covariates. Among the covariates, it was hypothesized that obesity will have the greatest influence on the association between alcohol use and diabetes. It was found that an increase in binge drinking actually decreases the risk of type II diabetes. While each covariate had a significant effect on diabetes, sleep was a covariate that was overlooked in previous literature that was found to have a protective effect. For every hour of sleep, the risk of diabetes decreased by 10%. The purpose of writing is to fulfill course requirements for BBH411W and to stand as a personal writing sample, but the finding should not be treated as generalizable research.