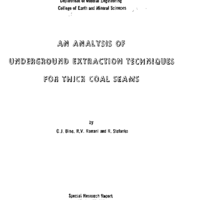 AN ANALYSIS OF UNDERGROUND EXTRACTION TECHNIQUES FOR THICK COAL SEAMS

Special Research Report SR-111 Less than two percent of this nation•s annual coal production comes from underground mines in the West. A contributing factor to the low production appears to be the unfavorable economics of deep mining western coal seams. Additionally, a large fraction of the western coal reserves that may be deep mineable are thick seams. Thick coal seams do not lend themselves readily to extraction with methods common to the coal industry in the U.S.A. However, coal production from western deep mines has to increase to alleviate the current energy crisis. Al- though the development of new technology and equipment may be in order for the long run, attention must be directed, for short-term gains, to the adoption of proven technology. The problems, technical and non-technical, which are associated with the mining of thick coal seams are analyzed in this thesis. Mining methods currently practiced abroad are reviewed. A discussion of North American thick-seam mining, based on information gathered from mine-site visits and published literature, is also included. On the basis of an inventory of geologic and mining conditions in the West, four methods are recommended for potential application, An economic evaluation of the proposed methods, on a panel basis, has been conducted. A compara- tive analysis of the proposed methods with typical conventional and continuous sections is provided. The thesis has arrived at a number of conclusions. Although there are several thick-seam methods practiced abroad, these methods cannot be adapted, for the most part, without variations for U.S. condi- tions. This is due, mainly to the different economic and political climate of the United States. However, thick-seam methods can be xiv designed to be economically competitive with methods employed in seams of average thickness. Further, the recovery rates are also acceptable. New equipment, such as shields, should find increased acceptance whereas standard U.S. equipment, such as shuttle cars, will have limited appli- cations.