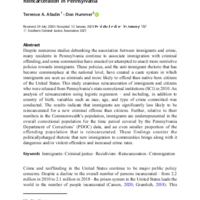 Immigrant and Citizen Reincarceration in Pennsylvania

Despite numerous studies debunking the association between immigrants and crime, many residents in Pennsylvania continue to associate immigration with criminal offending, and some communities have enacted (or attempted to enact) more restrictive policies towards immigrants. These policies, and the anti-immigrant rhetoric that has become commonplace at the national level, have created a caste system in which immigrants are seen as criminals and more likely to offend than native-born citizens of the United States. This study examines reincarceration of immigrants and citizens who were released from Pennsylvania’s state correctional institutions (SCI) in 2010. An analysis of reincarceration using logistic regression -- and including, in addition to country of birth, variables such as race, age, and type of crime committed--was conducted. The results indicate that immigrants are significantly less likely to be reincarcerated for a new criminal offense than citizens. Further, relative to their numbers in the Commonwealth’s population, immigrants are underrepresented in the overall correctional population for the time period covered by the Pennsylvania Department of Corrections’ (PDOC) data, and an even smaller proportion of the offending population that is reincarcerated. These findings counter the politicallycharged rhetoric that new immigration to communities brings along with it dangerous and/or violent offenders and increased crime rates.