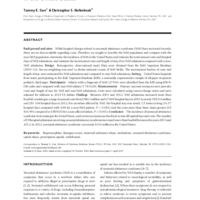 The economic burden of neonatal abstinence syndrome in the United States

Background and aims: While hospital charges related to neonatal abstinence syndrome (NAS) have increased recently, there are no data available regarding costs. Therefore, we sought to describe the NAS population and compare with the non-NAS population, determine the incidence of NAS in the United States and estimate the total annual costs and hospital days of NAS admissions, and estimate the incremental costs and length of stay of an NAS admission compared with a non-NAS admission. Design: Retrospective, observational study. Data were obtained from the Kids' Inpatient Database (2003–12). Survey-weighting was used to obtain national counts of NAS births. The incremental burden of costs and length of stay were estimated for NAS admissions and compared to non-NAS admissions. Setting: United States hospitals from states participating in the Kids' Inpatient Database (KID), a nationally representative sample of all-payer in-patient pediatric discharges. Participants: Infants with a diagnosis of NAS (27 943) were identified from the KID using ICD-9-CM codes and compared with non-NAS infants (3 783 629). Measurements: Primary outcome measures were provider costs and length of stay for NAS and non-NAS admissions. Costs were calculated using cost-to-charge ratios and were adjusted for inflation to 2014 US dollars. Findings: Between 2003 and 2012, NAS admissions increased more than fourfold, resulting in a surge in annual costs from US$61 million and 67 869 hospital days in 2003 to nearly US$316 million and 291 168 hospital days in 2012. For an infant affected by NAS, the hospital stay was nearly 3.5 times as long (16.57 hospital days compared with 4.98 for a non-NAS patient, P < 0.001) and the costs more than three times greater (US$16 893 compared to US$5610 for a non-affected infant, P < 0.001). Conclusion: The incidence of neonatal abstinence syndrome is increasing in the United States, and carries an enormous burden in terms of hospital days and costs. The number of US hospital admissions involving neonatal abstinence syndrome increased more than fourfold between the years 2003 and 2012. In 2012, neonatal abstinence syndrome cost nearly $316 million in the United States.