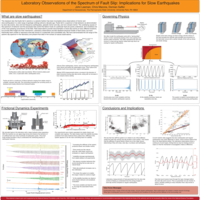 Fault zone failure spans a wide range of slip modes, including normal earthquakes, low-frequency earthquakes, episodic tremor and slip, non-volcanic tremor, slow slip events, and steady aseismic creep. Despite widespread observations in a range of tectonic and geologic environments, the physics underlying these events remain poorly understood and present some of the largest seismological conundrums the field has faced. Here we present a systematic laboratory study of slow slip and build a mechanical explanation for the spectrum of fault slip modes. We show that complex behaviors can arise from relatively simple models using traditional rate-and-state friction (RSF) concepts.

We sheared quartz gouge at constant velocity in a double-direct shear configuration and controlled the effective stiffness of the system by changing the normal stress and by introducing compliant materials in the loading path. There is a critical stiffness value (kc) that represents a bifurcation point separating stable and unstable systems. For systems in which k < kc, the rate at which the fault weakens is greater than that at which the surrounding elastic material can release energy into the system, therefore generating a force imbalance and acceleration to fully dynamic and unstable stick-slip. For systems in which k > kc, the surrounding media unloads energy faster than the fault can weaken and therefore the system is stable. We observed both cases in the laboratory and took careful measurements to determine the constitutive frictional properties of the system.

We find that the predicted stability boundary (defined by k/kc = 1) fits our observations to first order, but rather than a strict bifurcation, slow slip and quasi-dynamic failure occur at and very near k/kc = 1. We also observe that the peak slip velocity and duration of stick slip events vary systematically with this stiffness ratio. We suggest that the stiffness ratio can directly diagnose the type of fault slip that will occur in a given system and requires no additional complicating physics such as multiple state variables, dilatancy hardening, or velocity dependent friction parameters. This mechanism is also broadly applicable and consistent with observations from natural faults ranging from subduction zones to low-angle normal faults at the base of fast moving ice streams.