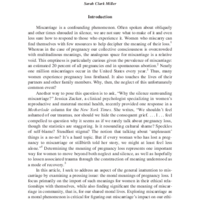 The Moral Meanings of Miscarriage

In this article, I seek to address an aspect of the general inattention to miscarriage by examining a pressing topic: the moral meanings of pregnancy loss. I focus primarily on the import of such meanings for women in their ethical relationship with themselves, while also finding significant the meaning of miscarriage in community, that is, for our shared moral lives. Exploring miscarriage as a moral phenomenon is critical for figuring out miscarriage’s impact on our ethical self-conception—on how we understand ourselves as moral agents—and in forming and deforming how we understand one another in the broader context of our moral communities—in intimate realms, in public realms, and in various realms in between. I begin by articulating the need for a dedicated perinatal ethics, then developing an overview of this approach. It is against this backdrop that miscarriage’s complex moral meaning can best emerge. I then consider a few promising yet problematic concepts for comprehending the moral meanings of miscarriage, including moral agency, reactive attitudes (in this case, betrayal and guilt), moral responsibility, and moral standing.