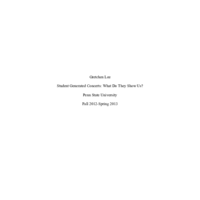 STUDENT-GENERATED CONCERTS: WHAT DO THEY SHOW US? - Gretchen Lee

Conductors of professional orchestras have reached out to families with children since Leopold Stokowski partnered with Disney’s Fantasia (1940) and Leonard Bernstein produced a series of Young People’s Concerts (1958-1972). This tradition continues today as professional orchestras, including The Boston Symphony, The New York Philharmonic, and The Colorado Symphony Orchestra, continue to offer children’s concerts and other youth outreach events. Unfortunately, these efforts are largely failing, even though these youth concerts have been carefully designed to be both accessible and entertaining. According to the Social Impact of the Arts Project, overall attendance at classical concerts, jazz concerts, and musical heater productions has sharply declined from 1982 until the conclusion of the project in 2008 (Stern, 2011). The Survey of Public Participation in the Arts, conducted by the National Endowment for the Arts in partnership with the U.S. Census Bureau, confirms this decline. The most recent survey revealed that just 24 percent of U.S. adults age 18 and over attended a music, theater, or dance performance over the one-year period of the study (www.nea.gov/SPPA, 2011).