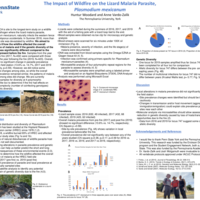 The Impact of Wildfire on the Lizard Malaria Parasite, Plasmodium mexicanum

"Hopland, CA is site to the longest-term study on a wildlife malaria pathogen where the lizard malaria parasite, Plasmodium mexicanum, naturally infects the western fence lizard, Sceloporus occidentalis. In Summer 2018, more than half of the site was devastated by wildfire. We aimed to determine if/how the wildfire affected the overall prevalence of malaria and if the genetic diversity of the parasite was significantly different compared to the diversity present before the fire. Samples from the year prior to the fire (2017, N=432) were compared with those collected the year following the fire (2019, N=423). Overall, there was no significant change in parasite prevalence across the field station (13.6% vs. 14.7%, 2017 and 2019 respectively, p=0.59). However, we did notice some prevalence changes among sites, so while the overall malaria prevalence remained similar, the patterns of malaria infection among sites did change. We are currently analyzing samples for diversity at 4 polymorphic microsatellite loci to determine if the fire had effects on infection complexity (number of coinfecting genotypes) and/or allelic diversity.