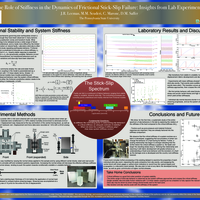 The Role of Stiffness in the Dynamics of Frictional Stick-Slip Failure: Insights from Lab Experiments

Frictional stick­slip is considered to be the mechanism of shallow earthquakes, in which elastic energy slowly accumulates and is released during dynamic failure. Frictional materials can fail via stick­slip or stable sliding. In the context of rate­and­state friction, the transition between these behaviors is a Hopf bifurcation. However, laboratory and field observations suggest that more complicated behavior occurs, manifested by a range of slip modes that include slow earthquakes and slow slip transients. In the laboratory, these behaviors arise in materials exhibiting two­state variable friction behavior, or in systems with more complex elastic coupling than 1D interactions for a spring and rigid slider. To explore this problem, we conducted shearing tests on layers of quartz powder with a mean grain size of 10 μm in a double­direct­shear geometry. Elastic stiffness of the loading system was varied by changing the central forcing block and the applied normal stress. Experiments were run at room temperature under a controlled relative humidity of 100%. Shear loading velocity was fixed at 10 μm/s. We unloaded and reloaded the shear stress at fixed intervals during experiments to measure the aggregate system stiffness at multiple strains. For more compliant systems we observe slow stick­slip behavior, with slip durations on the order of seconds. Stiffer loading systems exhibit linearly stable behavior, even to velocity perturbations of an order of magnitude. The critical stiffness boundary suggested by rate­and­state friction appears to be a good first order predictor of the system, but does not capture its behavior completely. Our observations suggest that the interplay between loading stiffness and friction constitutive properties can in some cases produce an extended transition between stable and unstable sliding as a function of net slip in a given experiment, including a regime of complex slip behavior with slow stick­slip. This transition is caused by systematic changes in both gouge layer stiffness and friction as a function of accumulated strain, possibly related to shear localization. Our results suggest that the behavior of tectonic faults may evolve with accumulated slip that drives changes in stiffness, its spatial distribution along the fault, and frictional parameters.