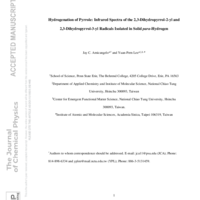 The reaction of hydrogen atoms (H) with pyrrole (C4H4NH) in solid para-hydrogen (p-H2) matrices at 3.2 K has been studied by infrared spectroscopy. Upon reaction of the H atoms with pyrrole in p-H2, a new series of lines appeared in the infrared spectrum, and based on secondary photolysis, it was determined that the majority of the new lines belong to two distinct chemical species; these lines are designated as set A and set B. According to quantum-chemical calculations performed at the B3PW91/6-311++G(2d,2p) level, the most likely reactions to occur under low temperature conditions in solid p-H2 are the addition of an H atom to carbon 2 or 3 of C4H4NH to produce the corresponding hydrogen-atom addition radicals (HC4H4NH•). When the lines in sets A and B are compared to the scaled harmonic and anharmonic vibrational infrared stick spectra of these two radicals, the best agreement for set A is with the radical produced by the addition to carbon 3 (2,3-dihydropyrrol-2-yl radical, 3-HC4H4NH•), and the best agreement for set B is with the radical produced by addition to carbon 2 (2,3-dihydropyrrol-3-yl radical, 2-HC4H4NH•). The ratio of the 2-HC4H4NH•to 3-HC4H4NH•radicals is estimated to be 4-5:1, consistent with the smaller predicted barrier height for the H-atom addition to C2. In addition to the assignments of the 2,3-dihydropyrrol-2-yl and 2,3-dihydropyrrol-3-yl radicals, a series of lines that appear upon 455-nm photolysis have been assigned to 1,3-pyrrolenine (2-HC4H4N).