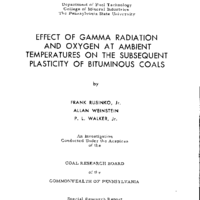 Special Research Report SR-10 Eight Pennsylvania bituminous coals (-40 mesh held in closed containers} were irradiated to a total gamma dosage of 10 8 roentgens at ambient temperature in the presence of varying amounts of oxygen. Following irradiation, the amount and analysis of the residual gas remaining above the coals were determined. Subsequently, fluidities of the irradiated coals were measured using a Gieseler apparatus and compared with fluidities of the uni:cradiated coals. The amount of oxygen in contact with the coal was varied by conducting the irradiations in vacuum, air, and pure .. o~ygen atmospheres. Under~ these particular conditions, the amount of oxygen available to the coal was approximately 2 x lo- 6 , 0. 2, and 1 .. 1 cc. at S. T. P. per gram of coal, respectively. For six of the coals, vacuum-irradiation resulted in a negligible change in fluidity. For two of the high volatile A coals, a significant decrease in fluidity was found. For six of the coals, air-irradiation. resulted in a significant (and in some cases very large) increase in fluidity. For two of the coals (a low volatile coal and one of the high volatile A coals which showed a significant decrease in fluidity after vacuum-irradiation) air-irradiation had a negligible effect on fluidity. The effect of oxygen-irradiation on the fluidity of the coals is more varied. Far five of the six high volatile A coals, oxygen-irradiation substantially lowered the fluidity below that of the corresponding unirradiated coals. For one high volatile A coal and a medium volatile coal, oxygenirradiation increases the fluidity over that of the un.irradiated coals. Oxygen-irradiation has a negligible effect on the fluidity of the low volatile coal. These results show that pretreatment using a combination of gamma radiation and oxygen can have a marked effect on the fluidity of, at least, medium and high volatile bituminous coals. The fluidity can frequently be increased or decreased depending upon the amount of oxygen present during irradiation.