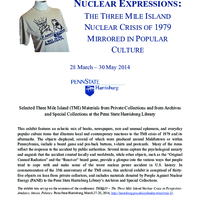 This exhibit featured an eclectic mix of books, newspapers, rare and unusual ephemera, and everyday popular culture items that illustrate local and contemporary reactions to the TMI crisis of 1979 and its aftermaths. The objects displayed, several of which were produced around Middletown or within Pennsylvania, included a board game and pin-back buttons, t-shirts and postcards. Many of the items reflected the response to the accident by public authorities. Several items captured the psychological anxiety and anguish that the accident created locally and worldwide, while other objects, such as the “Original Canned Radiation” and the “React-or” board game, provide a glimpse into the various ways that people tried to cope with and make sense of the worst nuclear power accident in U.S. history. In commemoration of the 35th anniversary of the TMI crisis, this archival exhibit was comprised of thirty-five objects on loan from private collectors, and included materials donated by People Against Nuclear Energy (PANE) to the Penn State Harrisburg Library’s Archives and Special Collections.

The exhibit was set up on the occasion of the conference: TMI@35 – The Three Mile Island Nuclear Crisis in Perspective: Analyses, Stories, Policies. Penn State Harrisburg, March 27-28, 2014, http://harrisburg.psu.edu/calendar/event/tmi-35.