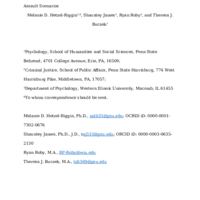 Hetzel-Riggin, Gender, Myths, and Assumptions: Correlates of Risk Perception in Sexual Assault Scenarios, 'Journal of Interpersonal Violence' (, ) pp. 088626052110358. Copyright © 2021. DOI: 10.1177/08862605211035867. Users who receive access to an article through a repository are reminded that the article is protected by copyright and reuse is restricted to non-commercial and no derivative uses. Users may also download and save a local copy of an article accessed in an institutional repository for the user's personal reference. For permission to reuse an article, please follow our Process for Requesting Permission.