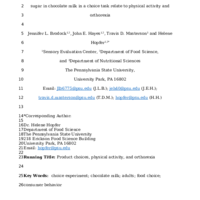 Differences in preferred fat level, sweetener type, and amount of added sugar in chocolate milk in a choice task relate to physical activity and orthorexia

Fluid dairy milk consumption has decreased over the last 4 decades, and this drop has accelerated with the introduction of many competing beverage alternatives, such as plant-based milks and bottled water. Conversely, flavored milk sales remain strong, but many adults avoid flavored milk because of concerns about added sugar and calories and/or excessive sweetness. Here we used two discrete choice experiments to assess interest for a dark chocolate milk drink in adults, and explored whether there might be a consumer segment who prefers a more bitter, lower sugar chocolate milk. Adults were recruited from the Mid-Atlantic region of the United States for two conjoint analysis studies. In a general population cohort (n = 735), type of sweetener was the most important attribute (24%), followed by milk fat (19%), grams of added sugar (16%), front of pack messaging (15%), package type (12%), carton size (8%), and protein content (6%). Attribute importance was relatively consistent in a second study with a younger, more physically active cohort (n = 1017). Product choices in the active cohort were related to orthorexia and physically activity scores, indicating revealed preferences in a choice task are reflective of personal lifestyle and eating behavior. In both cohorts, three consistent consumer segments were identified and characterized: the calorie conscious, the average consumer, and the natural eaters. These data can help uncover lifestyle differences between adult consumers that impact their food product choices.