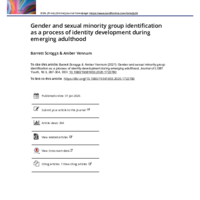 The present study explores how identifying with the gender and sexual minority (GSM) community can be an important developmental milestone and potential protective factor for GSM individuals. Cross-sectional data were collected from the United States using Amazon’s Mechanical Turk (MTurk) to garner a nationally representative sample of individuals (n = 365) between the ages of 18-29 (M = 25.07 years old) who self-identified as a sexual and/or gender minority. Results of a structural equation model indicated that a higher sense of GSM identity salience was associated with greater attribution of their negative experiences to prejudice, which was associated with decreased well-being. Importantly, identifying with the GSM community was a protective factor for this population. Whereas higher attributions of negative experiences to prejudice were directly associated with decreases in well-being, when explained through group identification, the association was positive. This paper extends current research on the GSM community by situating group identification as a process of one’s overall identity development and exploring the protective factors related to this identification. The study highlights the important ways in which connecting with other gender and sexual minority individuals can protect the individuals in this population from the negative outcomes of prejudice.