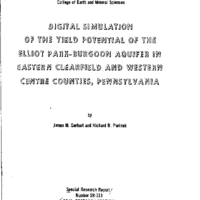 DIGITAL SIMULATION OF THE YIELD POTENTIAL OF THE ELLIOT PARK-BURGOON AQUIFER IN EASTERN CLEARFIELD AND WESTERN CENTRE COUNTIES, PENNSYLVANIA

Special Research Report SR-113 The objective of this study was to make a preliminary evaluation of the aquifer potential of a portion of a thick sandstone sequence underlying the coal-bearing strata in west-central Pennsylvania. This sandstone sequence, known in this report as the Elliot Park-Burgoon aquifer, consists of the rocks of the Elliot Park Formation and the Burgoon Member of the Pocono Formation. The thickness of this sandstone complex varies from about 100-600 feet in the area studied. The specific region of this study encompasses eight 7 1/2-minute quadrangles in eastern Clearfield and western Centre Counties, Pennsylvania, which include the cities of Philipsburg and Clearfield. An estimate of the yield potential of the Elliot Park-Burgoon aquifer in a 280 square mile region within the study area was obtained through the use of a finite difference, ground-water flow, digital computer model. The program for this model was written by P. C. Trescott and G. F. Pinder and published as a Preliminary Report by the U. S. Geological Survey in 1975. Utilizing the limited data available on the geologic and hydrogeologic systems in the region, and assuminq the aquifer to be unconfined, the withdrawal of ground water by pumping was simulated by computer. An approximate yield potential of greater than 40 million gallons per day (150,000 gallons per day per square mile) over a period of 15 years was obtained. For a pumping period in excess of 15 years, the yield potential would be somewhat less because water levels were still declining at the end of the simulation and steady-state conditions had not yet been achieved. Problems with the stabilization of the model precluded any estimates of the degree to which the yield potential would decline if pumping were to continue at a constant rate in the simulation beyond 15 years. As a secondary objective, a preliminary investigation of the quality of the ground water in the Elliot Park-Burgoon aquifer was conducted in order to determine in a general way the effect that acid mine drainage has had on that ground water. A small-scale sampling program in a restricted region of the aquifer indicated that while the quality of mine waters in the study area was quite poor indeed, ground-water quality in the aquifer did not yet appear to be adversely affected.