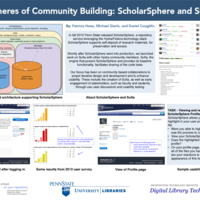 In fall 2012 Penn State released ScholarSphere, a repository service supporting self-deposit of research materials, for preservation and access. Shortly after ScholarSphere went into production, we launched work on Sufia with other Hydra community members. Sufia, the engine that powers ScholarSphere and provides its baseline functionality, facilitates sharing of the code base.

Our poster, presented at the 2013 Digital Library Federation Forum, shows how community-based collaborations can propel an iterative design and development; enhance usability; and even lead to unexpected benefits (such as the creation of Sufia). The poster includes a technical architecture model; code contribution visualizations; screen captures of ScholarSphere; and usability testing script excerpts.