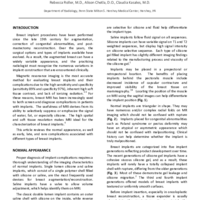 “MRI Appearance of Breast Implants and their Associated Complications”

Breast implant procedures have been performed since the late 19th century for augmentation, correction of congenital abnormalities, and postmastectomy reconstruction. Over the years, the surgical options and types of implants available have evolved. As a result, the augmented breast can have a widely variable appearance, and the practicing radiologist must recognize the numerous variations in implant construction that are encountered clinically. Magnetic resonance imaging is the most accurate method for evaluating breast implants and their complications due to the high sensitivity and specificity (sensitivity 89% and specificity 97%), inherent high soft tissue contrast, and lack of ionizing radiation.1-5 For these reasons, breast MRI has been increasingly used to both screen and diagnose complications in patients with implants. The usefulness of MRI derives from its ability to selectively suppress or emphasize the signal of water, fat, or especially silicone. The high spatial and soft tissue resolution makes MRI ideal for the characterization of breast implants.6 This article reviews the normal appearance, as well as early, late, and rare complications associated with different types of breast implants.