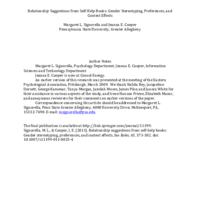 Popular books on heterosexual relationships often present gender-dichotomized views of behavior. To test predictions derived from gender schema and social role theories, relationship suggestions from Men are from Mars, Women are from Venus (Gray, 1992) were presented in masculine, feminine and neutral versions to 355 undergraduate students in the mid-Atlantic region of the United States. Participants either made descriptive stereotyping ratings or indicated their own preferences for the relationship suggestions. Half of each group was asked to respond as if the relationship in question was a romantic one, and half for a college roommate. When making descriptive stereotyping ratings, participant responses were in the stereotypic direction but with the means all close to the neutral midpoint. When making preference ratings, both women and men preferred neutral versions of the items over masculine and feminine versions, and women liked all types of items more than did men, but the average ratings indicated general appreciation for the items. Participants also liked the items better if the relationship was with a romantic partner rather than a college roommate. The highly positive reactions of all participants to all types of items and the failure to find consistent patterns of gender-stereotypic responses across rating methods and relationship contexts suggest that gender differences in relationship preferences may be less dramatic than portrayed in popular books. It is argued, however, that such books can impact readersâ perceptions of gender and relationships.