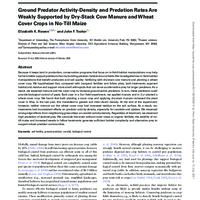 Because it keeps land in production, conservation programs that focus on in-field habitat manipulations may help farmers better support predators than by building predator habitat around fields. We investigated two in-field habitat manipulations that benefit producers and soil quality: fertilizing with dry-stack cow manure and planting a wheat cover crop. We hypothesized that, compared with inorganic fertilizer and fallow plots, both treatments augment habitat and residue and support more small arthropods that can serve as alternative prey for larger predators. As a result, we expected manure and the cover crop to increase ground-active predators. In turn, these predators could provide biological control of pests. Each year in a 3-yr field experiment, we applied manure and in 2 yr planted a wheat cover crop. We found that both planting a cover crop and applying dry-stack manure increased the plant cover in May. In the last year, this translated to greater soil mite (Acari) density. At the end of the experiment, however, neither manure nor the wheat cover crop had increased residue on the soil surface. As a result, our treatments had inconsistent effects on predator activity-density, especially for carabids and spiders. We observed strong edge effects from neighboring grass alleys on carabid activity-density. Regardless of treatment, we observed high predation of sentinel prey. We conclude that even without cover crops or organic fertilizer, the stability of no-till maize and increased weeds in fallow treatments generate sufficient habitat complexity and alternative prey to support robust predator communities.