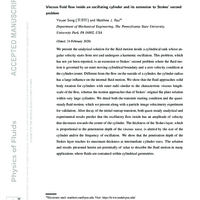 We present the analytical solution for the fluid motion inside a cylindrical tank whose angular velocity starts from rest and undergoes a harmonic oscillation. This problem, which has not yet been reported, is an extension to Stokes’ second problem where the fluid motion is governed by an outer moving cylindrical boundary and a zero velocity condition at the cylinder center. Different from the flow on the outside of a cylinder, the cylinder radius has a large influence on the internal fluid motion. We show that the fluid approaches solid body rotation for cylinders with outer radii similar to the characteristic viscous lengthscale of the flow, whereas the motion approaches that of Stokes’ original flat plate solution within very large cylinders. We detail both the transient starting condition and the quasisteady fluid motion, which we present along with a particle image velocimetry experiment for validation. After decay of the initial startup transient, both quasi-steady analytical and experimental results predict that the oscillatory flow inside has an amplitude of velocity that decreases towards the center of the cylinder. The thickness of the Stokes layer, which is proportional to the penetration depth of the viscous wave, is altered by the size of the cylinder and/or the frequency of oscillation. We show that the penetration depth of the Stokes layer reaches its maximum thickness at intermediate cylinder sizes. The solution and results presented herein are potentially of value to describe the fluid motion in many applications where fluids are contained within cylindrical geometries.